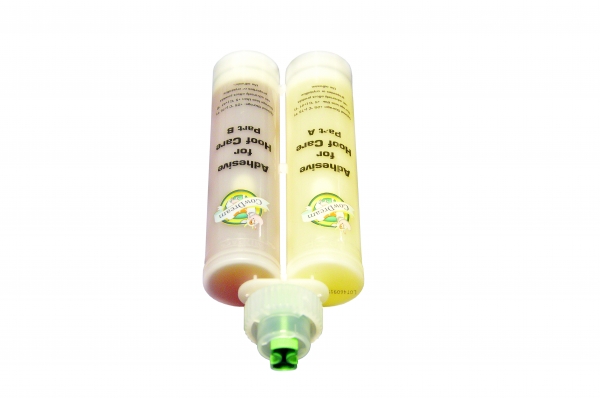 The adhesive is very easy to apply due to the use of mixing tips.

Thanks to the possibility of sticking the block on, we relieve the sick hoof by supporting the healing process.

The glue sets within 30 seconds.

Perfect for all types of blocks

We will glue both wooden and rubber blocks with CowDream glue.

Easy and quick application
CowDream glue is a two-component polyurethane glue equipped with a replaceable mixing tip system, thanks to which the glue application is quick and very easy. One cartridge is enough for 8 to 10 glue application depending on the hoof size.

Fast-setting
The glue sets within 30 seconds, and after about 2-4 minutes the animal can already walk on the leg to which the block was glued.

In order for the adhesive to stick properly, we must first clean and dry the hoof. The storage temperature should not be below 5 °C because then the adhesive may lose its properties. It is optimal to store the adhesive at a temperature of about 25 ° C. The adhesive can be used both in summer and winter.

Perfect for all types of blocks
CowDream glue is the perfect solution for both wooden blocks, rubber blocks and rubber boots. The use of two-component CowDream glue gives us confidence that the glued block will remain in place at all times.

In our offer you will also find a glue dispensing gun and mixing tips for CowDream glue.

How to apply the adhesive correctly
The adhesive should be placed in the application gun. Then remove the glue plug and place a mixing tip in its place, which will allow us to mix the glue components. Now align the cartridge with the adhesive by setting it straight up, and then squeeze the gun handle to apply to remove air.

After about 30 seconds, the glue will have set, and after 2-4 minutes the claw will be able to bear the weight of the animal again. The mixing tip should remain on the cartridge until the adhesive is needed again. Only then change the mixing tip to a new one.

It is very important for good adhesion of the glue that the hoofs are properly prepared for this treatment. It must be cleaned and dried. The claw can be cut so that it has a rough surface, thanks to which the grip will be better. Pressing the block smeared with glue can not do it with too much force because then too much glue can flow out and between the hoof and the block its layer will be too thin.

Animal welfare
Currently, care and concern for animal health requires a professional approach to treating hooves. Contemporary hoof care is currently undergoing many changes in support and improvement of professional claw treatment. To make the right treatment decision, we need to familiarize ourselves with the characteristics of the ailments that farm animals face.

This website uses cookies to improve your experience while you navigate through the website. Out of these cookies, the cookies that are categorized as necessary are stored on your browser as they are essential for the working of basic functionalities of the website. We also use third-party cookies that help us analyze and understand how you use this website. These cookies will be stored in your browser only with your consent. You also have the option to opt-out of these cookies. But opting out of some of these cookies may have an effect on your browsing experience.
Necessary Always Enabled
Necessary cookies are absolutely essential for the website to function properly. This category only includes cookies that ensures basic functionalities and security features of the website. These cookies do not store any personal information.
Non-necessary
Any cookies that may not be particularly necessary for the website to function and is used specifically to collect user personal data via analytics, ads, other embedded contents are termed as non-necessary cookies. It is mandatory to procure user consent prior to running these cookies on your website.
SAVE & ACCEPT
X
×

Aaron was introduced to the dairy industry in 2000 after serving 4 years in the United States Navy when he took a job on a small dairy farm. It was on this farm that he found his passion for working with cows. Fascinated with many aspects of the farm, he took a particular interest in hoof trimming and decided to start his hoof trimming business in 2004. After completing a course on the Dutch Method Aaron continued to study the anatomy and bone structure of the bovine hoof to refine his hoof trimming style, called “The Balance Method”. In 2014 Aaron founded Midwestern Hoof Trimming School and has since been requested to consult for large dairy farms worldwide. Aaron has trained hundreds of hoof trimmers with various skill sets, from beginners to veteran professionals, on The Balance Method. He has been selected to speak at conferences and universities globally and has hosted workshops in 7 different counties. Aaron continues to exercise his passion as an active hoof trimmer and services several local top dairy farms in Wisconsin.
Aaron is a husband, a father of 6, and a grandfather. He enjoys spending time with his family and participating in outdoor activities such as hunting, camping, and fishing. His other passions include woodworking and primitive skills.

Sophie was born and educated in Australia, with a background of agriculture and livestock. She now lives in Sweden and has worked as an animal science researcher for the Swedish University of Agriculture for 16 years (during which time she gained her PhD). Her research activities included a wide range of cattle and pig industry funded projects relevant to improving farm animal welfare during handling, transport and at slaughter, and its link to improved product quality. She also started a company based on her livestock experiences both in Australia and Sweden, where she has conducted both consultation services and practical workshops, promoting low stress handling of cattle, pigs, and sheep. She has delivered over a 100 practical handling courses throughout Scandinavia, where both people and livestock attended.

Piet Kloosterman is a world-renowned and well respected Dutch hoof trimming trainer. He was born and raised on a farm in Friesland and worked from 1980 – 2017 as an instructor/ trainer in Dairy Husbandry at Practical Training Centre (IPC/ PTC +/ DTC) in Oenkerk, The Netherlands. In 1988 he became Head of the Hoof Trimming Department of the Training Centre, training hoof trimming in a wide range of countries over the world.

The main subject for training is hoof trimming in the “Dutch Method” developed by Mr. E. Toussaint Raven from the Veterinairy Faculty of Utrecht. The method is adopted and tutored by the Training Centre Oenkerk to agricultural students, farmers, farm workers, veterinarians and professional hoof trimmers (Diploma course), not only in the Netherlands but also abroad. The Training Centre Oenkerk is an international college for practical training in animal husbandry and grasslandmanagement. Location Oenkerk was the international college for Dairy Husbandry and training goats, sheep and horses.

Piet started international hoof care courses in 1986 in Ireland and from 1987 regularly in the UK (Farmkey, later Genus). He worked for the last 25 years closely with Embryonics in the UK. He was the Secretary and founder of the Dutch Hoof Trimmers Association for 17 years and is a regular visitor of the International Symposia of Lameness in Ruminants, North American congresses of the Hoof Trimmers Association and the annual meetings of the NACFT (UK hoof trimmers association).

Kurt Bach is a veterinarian employed by Viking Denmark, where he works with development, teaching and advice in better hoof health in dairy cows. Kurt is a trained farmer and trained as a veterinarian in 2008, where he wrote a thesis on finding digital dermatitis in the milking parlor. From 2013 to 2018, Kurt has been employed as a lecturer and PhD student at the University of Copenhagen. Here he has primarily worked with ultrasound scanning of hooves and research into changes in the hooves around calving. Kurt has passed the Danish hoof trimmer exam and currently teaches the Danish hoof trimmer education.
Viking Denmark is Denmark's largest breeding association.

Jessie studied Veterinary Medicine at Utrecht University from 2017 - 2021, with a focus on farm animals and public health. She performed her Masters program in Melbourne, Australia, where she did a 3 months research internship investigating the prevalence of Digital Dermatitis among cattle in Victoria, Australia. This work has been published in The Australian Veterinary Journal (10.1111/avj.12859). In 2018 she performed a research internship at Utrecht University to investigate different treatment approaches for digital dermatitis. This study is currently under review for publication. Next to claw health, she independently investigated the prevalence of udder cleft dermatitis and effect of a treatment with a copper- and zinc chelates spray. The results of study will be presented at the KVK Symposium.

Currently Jessie is working as a ruminant veterinarian in the South of the Netherlands. Besides cows, she treats sheep, goats and alpaca's. She is also really interested in horses, having 2 sporthorses, which she rides under the saddle (dressage, cross country and hunting). Besides horses, she’s owning a dog named Broome, a lovely Australian Shepherd.